"Cloudy with a Chance of Meatballs 2" topped!

This weekend in U.S. theaters began to appear certainly the most delicious film of the year. This is a continuation of the animated hit from 2009th year - "Cloudy with a Chance of Meatballs 2" which comes in local theaters on Thursday, 10 October!

Continued animated hit ate cinema competition this weekend !
This weekend in U.S. theaters began to appear certainly the most delicious film of the year . This is a continuation of the animated hit from 2009th year - " Cloudy with ćutfama 2" which in local theaters , but on Thursday, 10 October!
The animated comedy " Cloudy with a Chance of Meatballs 2" opened in 4,002 theaters even across the U.S. as a sort of record - never before any movie did not open in so many halls during the month of September. The overall American cinema earnings in the movie the first weekend was great $ 35 million , which is five million more than the previous sequel which will be in theaters began showing at this time 2009th year .
" Viewers love this franchise . We believe that the movie will be better accepted by the rest of the world , "said Sony distribution president Rory Bruer . Remember, the overall world cinema earning first part " meatball " is close to $ 250 million , and given such a movie opening in the first three days of extension would be very easy to make and much more .
Animated film " Cloudy with a Chance of Meatballs 2" in Croatian theaters on Thursday, 10 October
The film will of course be tuned to the Croatian , and some of the actors who lent their voices are Filip Juričić Mia Krajcar , Sinisa Popovic , Robert Ugrina , Zoran Gogić and others.
About the film :
After the catastrophic storm of food in the first film , Roger Prskalo and his friends are forced to abandon their city . Marin accepted the invitation of his idol Chester V to join the company , " The Live Crop" which was given the task of cleaning the island and where the best inventors in the world create technologies for the betterment of mankind. When Roger discovers that his machine is still working and is now creating mutant food beast- like living pickles , hungry tacodila , škampopanza and pome python he and his friends must return to save the world. 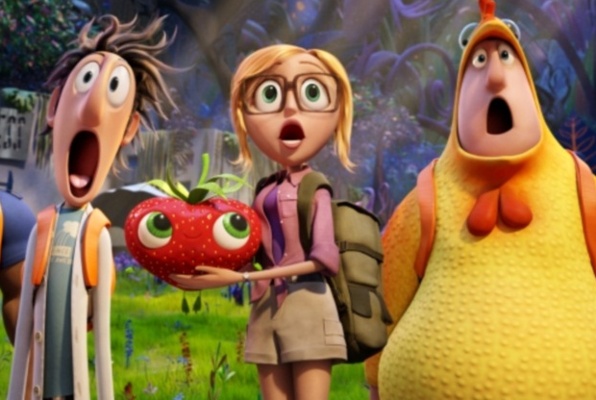